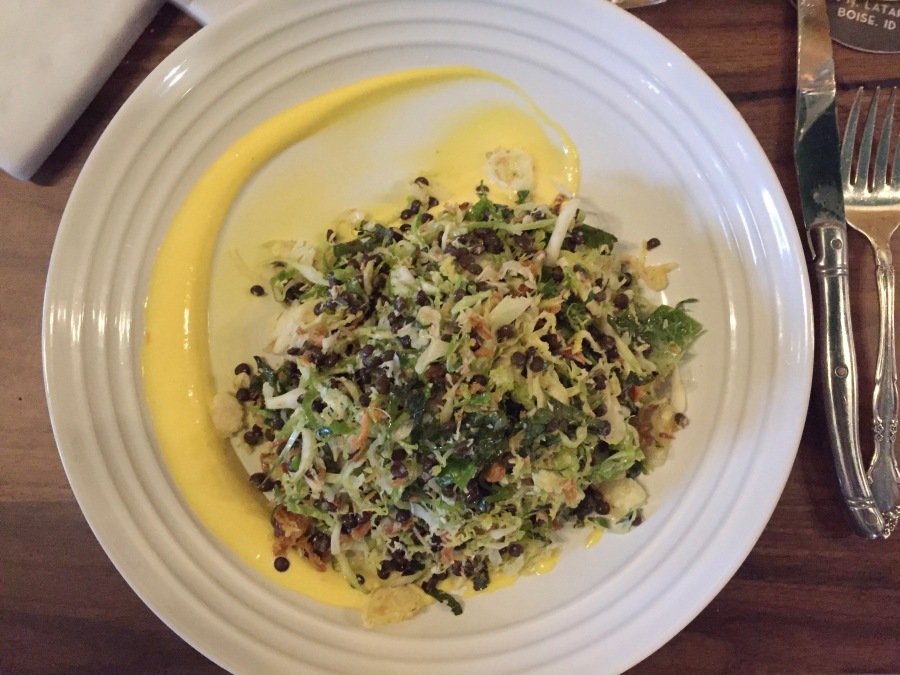 When I found out that Bleubird was closing I could barely leave my house. The sudden evaporation of the city’s finest sandwich shop felt like a nightmare. Bleubird’s brilliant sandwiches, inventive side salads and herbaceous fruit sodas were so beloved that a line often curled out the door and down the block on Friday afternoons.

At the nadir of my emotional crisis, I was saved by astounding, thrilling news. Sarah and David Kelly, the power couple behind Bleubird’s massive success, were opening a new restaurant on Boise’s bench. Cleverly dubbed ‘Petite 4’ (a nod to its diminutive size and location at 4 N Latah St.), the Kelly’s new venture would serve French food in an ‘upscale casual’ environment. I made reservations as soon as possible.

My girlfriend and I visited Petite 4 on a Saturday evening at 7:30 pm. Reservations are mandatory unless you plan on fighting for space at the bar. Petite 4 has inherited much of its stylistic vision from Bleubird, but the execution is closer to impeccable. A striking kitchen forms the heart of the restaurant, and every member of the staff looks dapper in a pinstriped apron.

My girlfriend, blessed to be born in 1997, turned to the wine list. I, a cursed child of 1998, examined the sodas. We asked the waitress for guidance, and she said that most people order one starter, one vegetable, and two entrees. Expecting small, fine dining sized portions, I ordered those four dishes and a cheese plate. Little did I know, the entrees here are roughly the size of a family sedan. When you consider the vastness of some of these meals, the prices are closer to a brewery than a steakhouse.

If I had it to do over, I would order one starter, two vegetables, and split an entrée. That way, I would have had room for dessert.

Here is what we ate:

Sarah and David Kelly are immensely talented restaurateurs. We are lucky that they choose to live and work in Boise. I understand why they decided to close Bleubird and open Petite 4. Bleubird was massively popular because it was the best possible version of a sandwich shop, but the type of food and the hours of operation created inherent limitations.

Petite 4 will not suffer from those limitations. It can grow and change endlessly in service of Sarah Kelly’s one of a kind culinary vision. It can bask in the inimitable classy-yet-casual atmosphere that Dave Kelly seems to conjure by simply existing; his energy, charm, and ability to remember names make you want to visit again and again.

I still miss Bleubird. I could visit Bleubird every weekday. I’ll visit Petite 4 once a month at most. My access to great food has been reduced. Some of the greatest sandwiches I’ve ever eaten, like the almost supernatural turkey ruben, are lost to history.

The food at Petite 4 is aggressively rich, and I wonder if the burger and the Croque Monsieur could be negotiated with a little more finesse. The burger relies heavily on fat and salt in its appeal to the taste buds. The brie in the middle of the Monsieur might be reduced to the benefit of more subtle flavors.

These are the premature accusations of a man who hasn’t fully sampled the menu. Bleubird sandwiches were often similarly overzealous with good results. But I’ve always felt that Kelly’s work is at its best when she leans toward her vegetarian inclinations. Bleubird veggie sandwiches forced me to reimagine what vegetables are capable of; Petite 4’s lentils are divine. I look forward to delving into the vegetables and seafood when I return.

Please visit Petite 4. Sit down and let Dave Kelly pour you a drink. Let Sarah Kelly cook you French food. You will witness the flourishing of a singular culinary vision, you will feel comfortable, and you will be reminded why more and more people want to live here, with us, in Boise, Idaho.