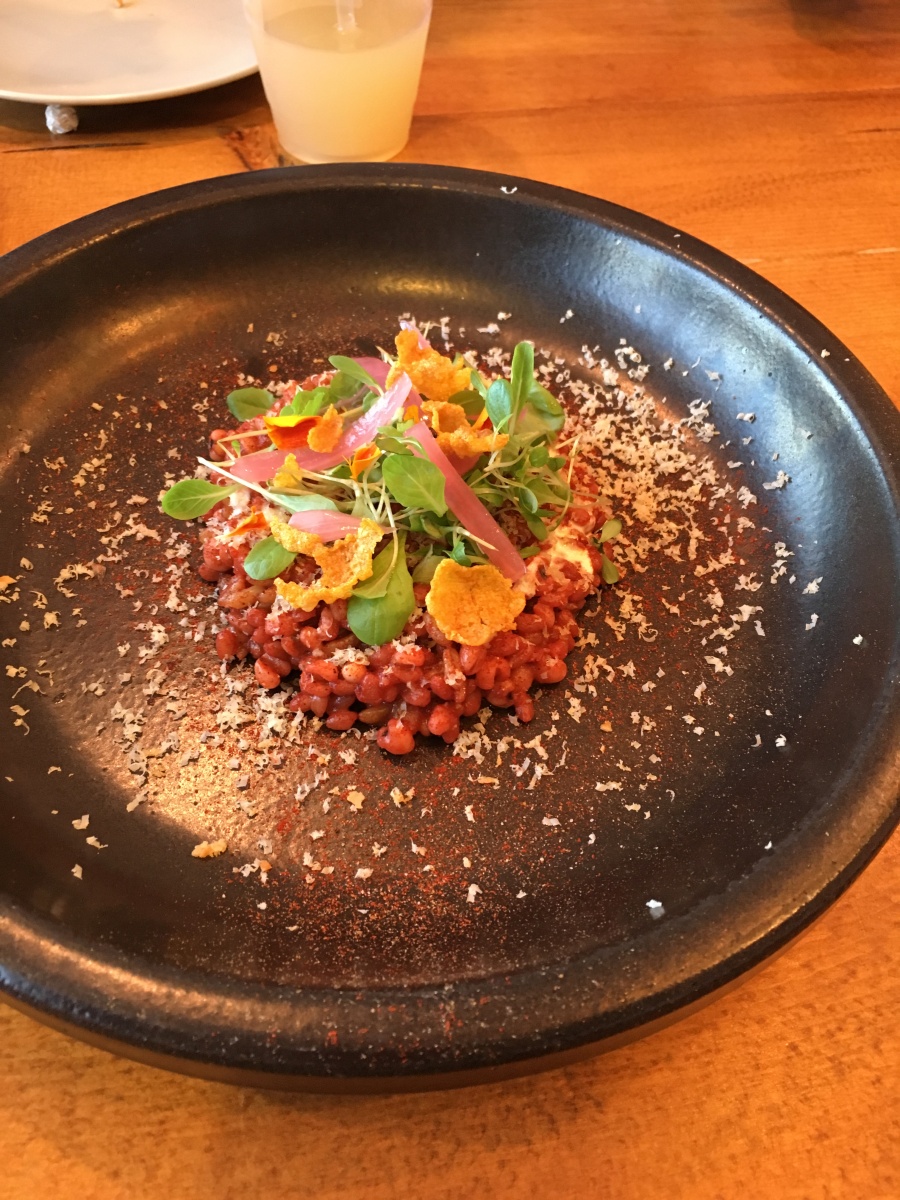 Baroo was recently lauded in Bon Appetite Magazine as one of the ten best restaurants of 2016.  And yet, my family was skeptical as we pulled into a nondescript shopping mall on Santa Monica Boulevard. The restaurant is two doors down from 7/11 and smaller than most Starbucks. It doesn’t have a sign. They feared I was leading them to gastrointestinal disaster.

Luckily, they were instantly comforted by the minimalist decor and cleanliness of this experimental eatery. The color scheme is white, and the layout is as self-effacing as its signage. Tight confines limit seating to a few opportune barstools and one communal table.

My eyes were instantly drawn to the shelf in the back, where jar after jug of liquids and vegetables are on display: fermenting.

Fermentation is the name of the game at Baroo. Chefs Matthew Kim and Kwang Uh have foregone traditional culinary approaches and chosen to innovate with microorganisms. The restaurant is a passion project and almost entirely experimental, hence the minute floorplan and lack of signage.

In a sentence, Baroo is to food what Kombucha is to beverages. This focus on fermentation creates completely unique flavors — on a spectrum that contains echoes of Tamari, lime and everything in between.

When I interviewed Boise chef Richard Langston on assignment from my cooking class, he said that acid was almost always the key to unlocking the full flavor potential of a dish. Whether its a little lemon on pasta or vinegar in a salad dressing, we rely on it’s sharpness and brightness to cut through and define the richest parts of a meal.

No matter how much delicious salt, butter or cream you heap on a dish, without acidic counterpoint it all begins to taste the same — like a painting that’s all one color. Our eating experience is a product of contrast.

The flavors created at Baroo are analogous to a squeeze of lemon. But they work on a much deeper level. If you imagine the flavors of a meal as frequencies of sound, lemon is almost always a high frequency, a bright soprano in the choir. Baroo’s fermentation defines fats and adds depth and richness while singing in a baritone. It was such a startling realignment of the flavor universe that greens in the celery seed pasta tasted rich and nutty, almost blending into the surrounding aged parmesan.

The simple beauty of the meals and the unprecedented matrix of flavors made this a one of a kind eating experience. The fact that this tiny culinary powerhouse sits without signage in a strip mall made it all the more exciting. As a man always looking for the unique eat, I felt this to be a singular triumph. Even the woman at the counter seemed impressed that a family of pasty Idahoans, clad in Harry Potter world merchandise, had managed to alight on such an urban secret.

But my credibility soon vanished when I walked up to the counter and asked for an order to go. I could see disappointment flood the eyes of the woman at the counter. “We don’t do to-go orders,” she flatly informed me. I knew I had been exposed — a glutton, and a dilettante.

Regardless of how scintillating their noodles were, I should have stopped when I was ahead. Sometimes the most important part of eating at a great restaurant is knowing when to leave — it’s always earlier than you think, when you still want a few more minutes at the table, and one last bite.

One thought on “Baroo is Hollywood’s Semi-Secret Gem”